End of the Year

Well folks, here is my end of the year round up. We had the most hectic and successful year to date. In 2020, we swore that we would never return to our overwhelming schedule. We had tasted solitude and liked it. Balance became the word we worshiped.
And then 2022's ambitions kicked us into high gear and our good intentions faded away. Now, Andy and I are writing a book, and the art festivals were bonkers. People wanted new work. Our barns are getting redone, the prairie restoration will start, the days fill up so fast.
Our spirits were dampened when we lost Andy's grandma, Lenore in August. They were as close as could be, talking every day. She added a depth to our lives that only a loving, wise yet humble 90+ year German Lutheran could. We spent every holiday with her. I was privileged to cook in her kitchen. I had to pass many a test to gain proper entry. She had designed it approx 79 years ago and had been living alone since the mid 1960's. So it was HER kitchen. But in the last few years, I cooked huge special meals in it, using her 75 year old gas stove while she perched on her red chair and watched. I even made a giant steamed steak and kidney pudding in some of her stoneware. One of my favorite memories is passing her the mixing bowl to lick after I made some brownies. I snapped a picture of her puffy white hair tucked into the bowls opening. She looked like a kid.
Below are some of my favorite pieces that I created over the last 12 months.

"Don’t you think now would be a good time to admit that perhaps you were wrong, apologize and ask for forgiveness? After all, can you honestly say that you played no part in just how strange things have become? Not even a small one? Pride gets in the way of so many potentially meaningful moments. We cling to the thinnest threads of it to keep from admitting our mistakes, lest we open ourselves up to criticism; Criticism that would force us to actually contemplate making a change. But a change is needed because this can’t keep happening over and over and over. It may only get worse. Everyone must agree to lay their swords down on the ground and back away slowly at roughly the same time. Only then can we look one another in the eye, take a breath and start over. Maybe you should consider going first." 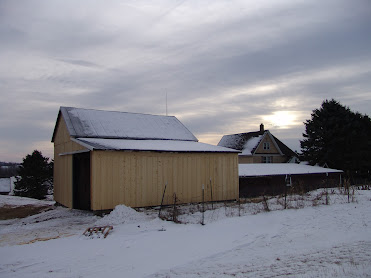 And Finally, our granary is getting insulated and resided. It is at least 120 years old and is super solid. We hope to make it an apartment/crash pad/ spare studio.... maybe for future students.